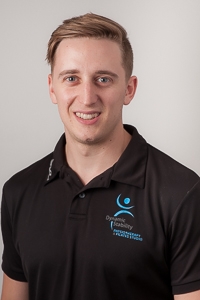 Andrew obtained his Advanced Diploma in Myotherapy in 2010 and was awarded the Academic Excellence Award for his academic and clinical skills. He then joined the team at Dynamic Stability and soon after completed a Diploma of Professional Pilates Instruction through Polestar Pilates Australia. Andrew has since been nominated for the Polestar Pilates mentor program allowing him to deepen his understanding of the Pilates principles and methodology whilst assisting students on their Pilates journey.

In 2018, Andrew completed a degree in Health Science majoring in Anatomy and Physiology through La Trobe University, as well completing a Level 1 Strength and Conditioning coaching accreditation through the Australian Strength and Conditioning Association. He was accepted into La Trobe again in 2019, where he will complete a Masters of Physiotherapy Practice over the next two years.

Andrew held a position with the Melbourne Vicentre swim team for ten years as their treating Myotherapist as well as having the opportunity to work on the pool deck at the Commonwealth and Olympic games swimming trials. He currently holds a position with Carlton Football Club as a Myotherapist/Sports Trainer.

Andrew enjoys working with elite athletes, recreational sports people and outdoor enthusiasts of all ages using a range of techniques such as myofascial release, trigger point therapy, dry needling, deep tissue massage, facilitated stretching and corrective exercise. His ability to detect muscle imbalances and relieve areas of restriction within the body aid in expediting recovery, regaining muscle function and range of motion and most importantly getting people back to the what they love doing.

Andrew has been playing ice hockey since he was seven years old, including representing Australia on four occasions overseas. He played 52 games for the Melbourne Mustangs Ice Hockey Club, which is part of the Australian Ice Hockey League (AIHL). Andrew continues to play for the Blackhawks Ice Hockey Club where he has played over 370 games and currently holds a leadership role in the senior team.